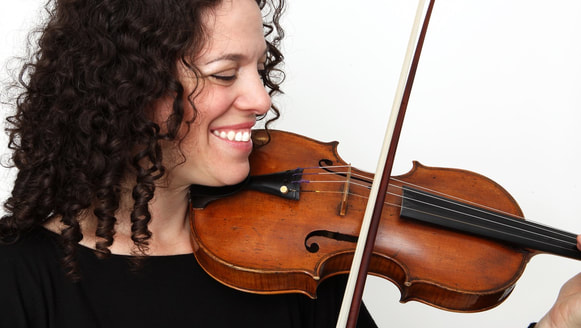 I am a member of the Canadian Opera Company Orchestra and am Principal 2nd violin of the Hamilton Philharmonic. I am active in and around Toronto with the Esprit Orchestra as Principal 2nd, Elora Festival, Toronto Symphony, and the National Ballet among others.

I love to play a variety of styles from Baroque to popular and alternative music. On Baroque violin I have performed and recorded as a member of the Aradia Ensemble, and played as a guest with Tafelmusik.  I have recorded and performed in Canada and abroad for film, television,  and radio, with popular musicians including Kanye West, Barbara Streisand, Earth, Wind, and Fire, The Canadian Tenors, Andy Stochansky, Patrick Watson, Belle and Sebastian, and Sarah Slean , as well as making the Polaris Prize winning "He Poos Clouds" CD with Indie artist Owen Pallett/Final Fantasy.

I have worked with theatre companies - one of my favourite collaborations,  with Theatre Rusticle in "Peter and the Wolf", Summerworks in "L'Histoire du Soldat", and at the Tarragon Theatre playing the violin as part of Judith Thompson's  "Body and Soul".

I have been a participant in many festivals including the National Repertory Orchestra, Norfolk Chamber Music Festival, Schleswig Holstein Music Festival, Prussia Cove and the Tafelmusik Baroque Seminar. I was a member of the Colorado Music Festival orchestra in Boulder for 7 years, played for many years with the Iris Chamber Orchestra (Memphis) and played in the Charlottetown Festival on PEI in the summer of 2006 and 2007.

After earning a Bachelor’s degree in both Violin Performance and English Literature from Indiana University, Bloomington, under the tutelage of Franco Gulli and Nelli Shkolnikova I went on to study and work in Munich and Berlin. In Germany, I was the recipent of stipends to study from both the Munich Orchestra Akadamie and the Deutsches Symphonie Orchester (formerly Radio Symphony of the West).

While living in Germany, I peformed with the Bavarian Radio Symphony, Munich Chamber Orchestra, and Deutsches Symphonie Orchester, Berlin. I also toured with numerous chamber orchestras and as a chamber musician while living there. I played under the baton of Sir Georg Solti, Roger Norrington, Vladimir Ashkenzay and Valery Gergiev among others. In my last year living in Germany I was engaged with the Gewandhaus Orchester in Leipzig.

I moved to Toronto to study with Lorand Fenyves at the Royal Conservatory of Music and the University of Toronto, from which I received an Artist Diploma and  Masters Degree in Violin Performance. I decided that Toronto felt like home from my first weeks as a student here.

One of five violinist siblings, I began violin with my sister Helene in East Meadow, Long Island at the age of 6. I received several awards and honors at a young age, including First Prize of the Long Island Philharmonic Young Artist’s Competition, and being awarded Concertmaster of both the New York All State and the National Youth Orchestra in Indianapolis.

I live in Seaton Village,Toronto with my trumpet-playing-cyclist husband, my 2 daughters, 2 cats, Watson, and Crick, and our dog Luna.